so here's my weird problem... wife wants this show
but it first airs the same midnight hour i'm recording
other talk shows while both my tuners are in use.
i figure i'll record hers later overnight when it re-airs
BUT when i tell hdhr to automatically record new season
on one channel, it keeps picking the first hour this airs.
(12am instead of 5am(i must manually set) or 3pm)
thus i'm stuck manually recording each 3am airing.
(due to poor reception, this is my only pbs choice) 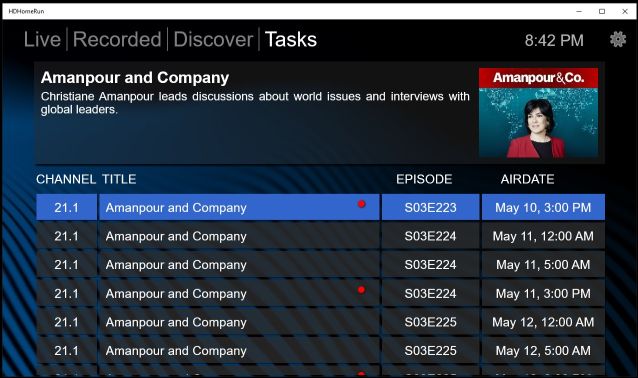 is there any work around to this that saves me time,
and my marriage

Don't do "new" also note that red dot doesn't necessarily mean which airing will record only that it is a candidate. Make sure your other shows have higher priority so they are in use at that time... you may also need to pay attention if the previous program on any channels are recording as it will continue on the same channel if it is already tuned

I'll have to see if I can look at those listings as what gets the red dot seems strange unless repeats that have previously been deleted and happen to be marked as first airing or you are setting one offs but that may have been a change in the ui as I typically use my own software to schedule... since you mentioned manually setting I would like to assume oneoffs

I don't see 3am airings only 3pm... it may be a guide issue if it airs first at 3pm and the midnight and 5am are from the previous day.


Edit: unfortunately my listings don't help me check as the repeat is on a subchannel rather than the main so can't really see how it is listed for you
Last edited by signcarver on Sat May 08, 2021 8:27 pm, edited 1 time in total.
Top

signcarver wrote: ↑Sat May 08, 2021 8:09 pm The easiest fix will almost always be to add another device to get more than 2 tuners (the 22 in my profile are sometimes not enough for my household so I have more than that)

While there is a real cost for additional tuners, there is also really no substitute for having more than a sufficient number of tuners. Between padding, and networks that intentionally add a minute or more to an episode (NBC used to call it supersizing, and shifted a lot of programs by a minute or so) and schedules that end up get shuffled so two (or more) "must record" shows end up at the same time, my rule of thumb is take what you think is the minimum number of tuners for your worst case day, and then multiple by two, and add two more (and round up to whatever is the next available HDHR quantity). That may be overkill, but is often far far cheaper than trying to explain to the SO why their favorite program was not recorded this evening.
Top

Setting the priority may be all you need to do.

You may have to fiddle with the priority up and down to get it to stick. Not sure if they fixed the bug I reported.
Top
Post Reply
4 posts • Page 1 of 1