I have the Flex 4k and an older Quarto.
Over classic ATSC channels they are all almost equal in reception quality, but the ATSC 3.0 channels are disaster in regard to signal quality.
Is that something normal?

I am in the Norfolk-Portsmouth-Newport News, VA market.
Top

One of the rules is that the ATSC 1.0 simulcasts have to be on a signal that has at least 95% coverage area of the signal that converted, so in a bunch of markets the only option for the participating stations was to convert a Class A signal because the rest of the participating stations either wouldn't have met the coverage requirements or didn't have room to carry simulcasts.
Last edited by kyl416 on Mon Jul 12, 2021 11:23 am, edited 1 time in total.
Top

I got that to work only briefly, not even worried about it, beening so weak.
However that's another lighthouse in the area that has three/four stations on it.
https://tvnewscheck.com/tech/article/fo ... -atsc-3-0/
Top

What other one... that is the WNLO lighthouse being talked about. (a lighthouse when it comes to ATSC 3.0 basically means channel sharing which in the article you linked to was WNLO hosting WAVY, WVBT, and WTVZ)
Top

I thought that the one you mentioned is on a stand alone antenna, WNLO-CD, channel 14.1, 14.2...
Different from the above lighthouse.
It was QVC and HSN...
Top

The HSN's and QVC's you see on 14-x are W26EV-D, which is owned by HSN's parent company. Pre-repack they were W14DC-D, but since it's a LPTV signal, they weren't protected in the repack and were displaced from RF 14 to RF 26 when the Class A WNLO-CD moved from RF 45 to RF 14.
Top

Thanks. So the ATSC 3.0 lighthouse is now on low UHF? Maybe that needs a different antenna than what I have, to boost the low end.
Top

Though possible to be an antenna issue, UHF antennas typically work on everything UHF with typically no need to worry about low vs high.

The main thing was already mentioned that it is an extremely low powered station compared to the other ones. You also didn't mention plp configuration which plays an important roll in the ability to receive a signal. Many use the term robust to describe plp that is typically configured as qam16 as it is typically viewable in any of the areas that get the signal... my personal connotation of robust is "full-bodied" (full-featured) and a qam16 will neve be full featured as there isn't enough bandwidth (they are using the term robust as forceful and the ability to punch through) so I would really wish they changed that term. Since it doesn't allow for much bandwidth, most will probably choose to have most plp's configured as qam256. In addition to such, there are variations in different correction mechanisms that can be implemented (at the cost of bandwidth) that can also help the station reach more but it is up to them to decide the tradeoff on such.
Top

It looks that indeed is a matter of compression.
This one barely comes on, I was lucky to catch that image, it fluctuates widely, sometimes with complete loss of signal. The other two sister stations are unwatchable too: 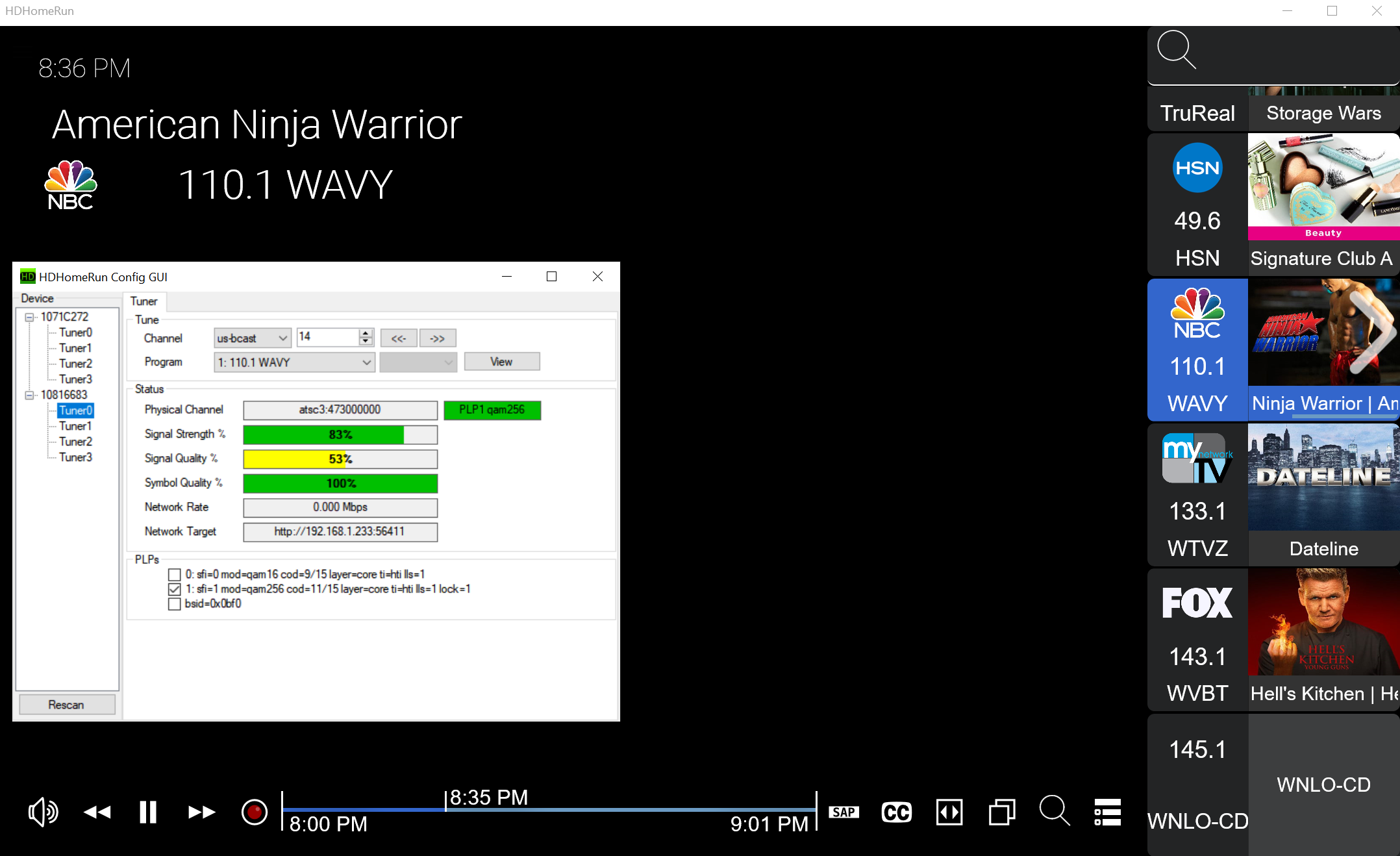 This one... kind of works. But that's only in the evening, not during daytime: 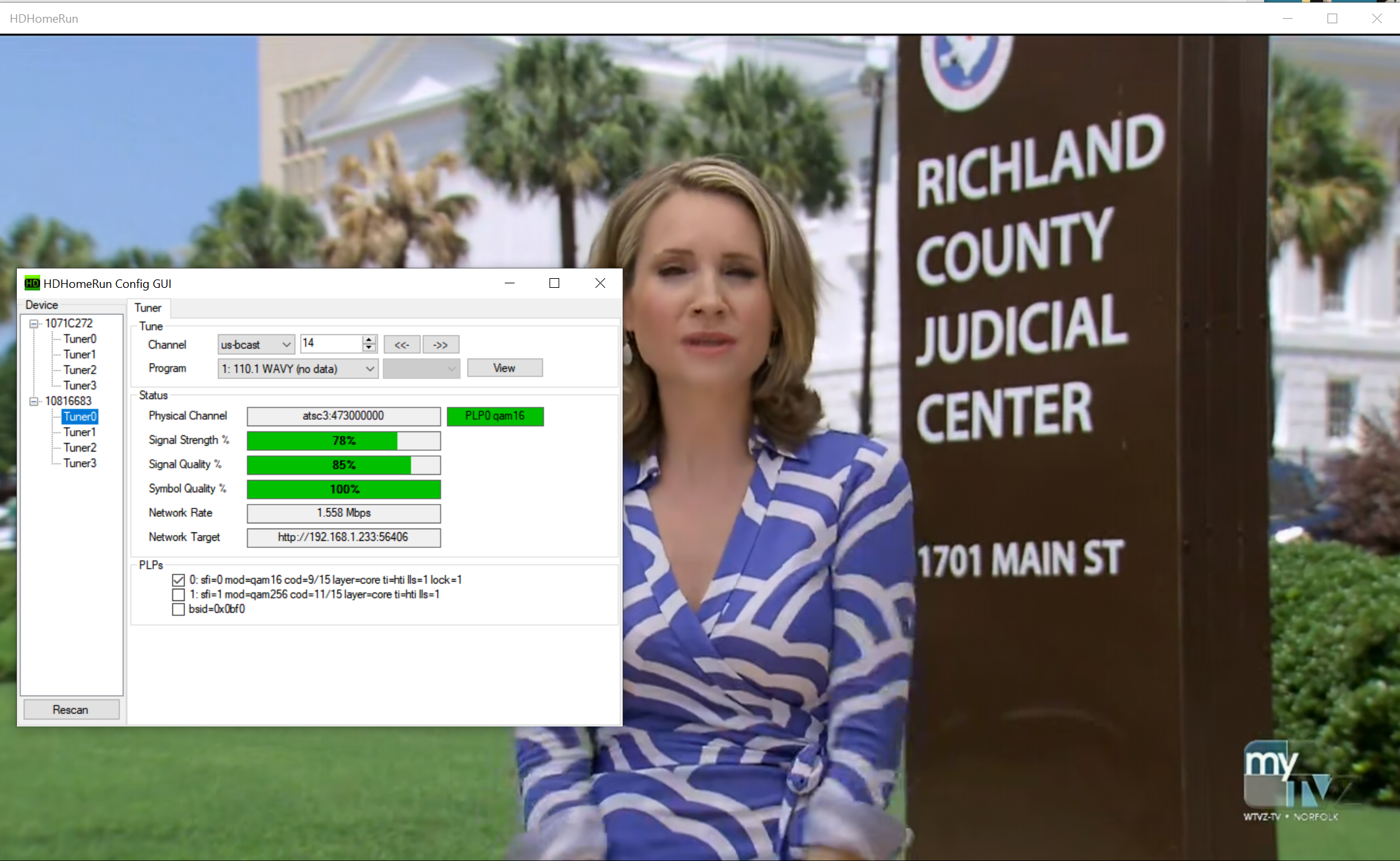 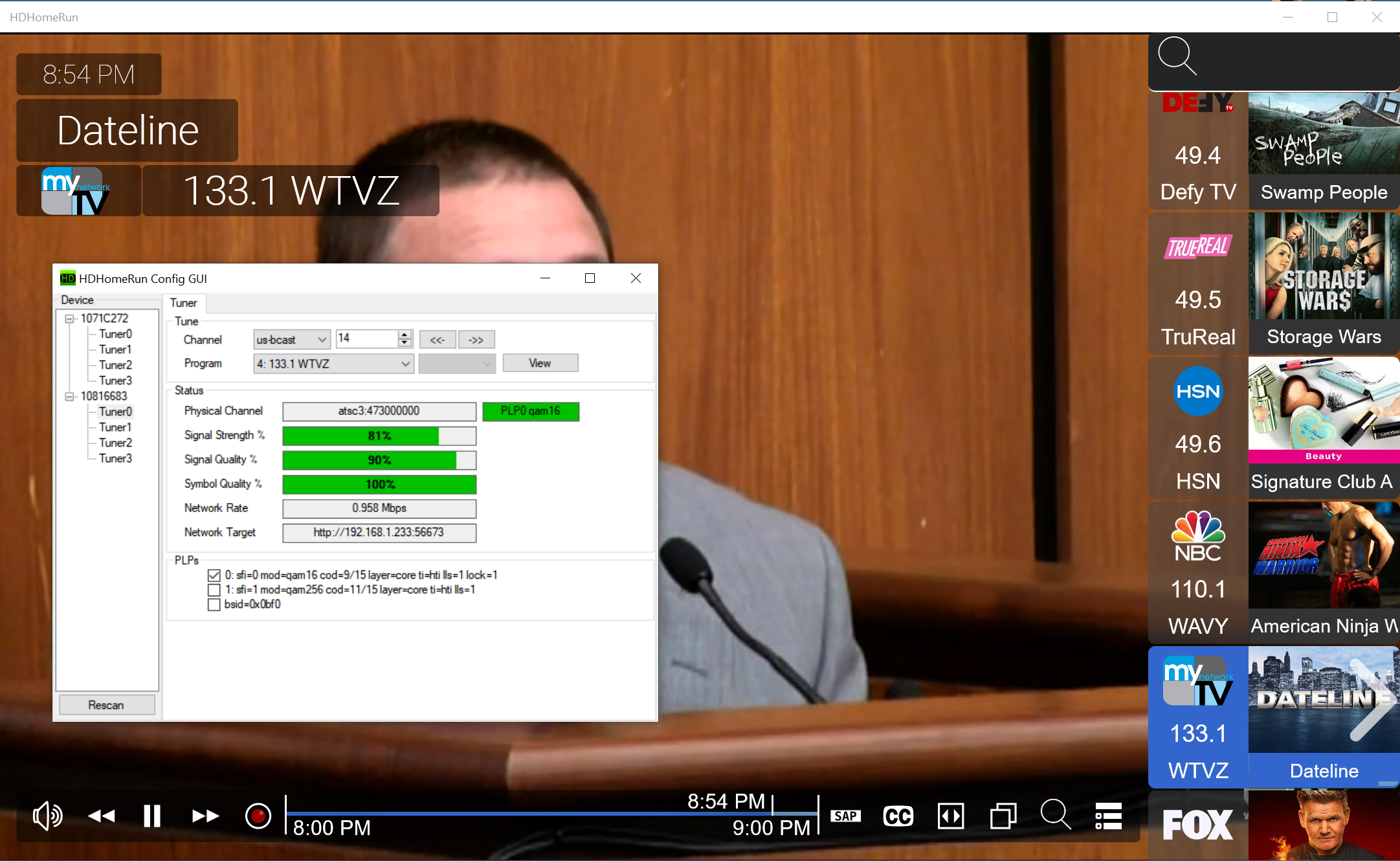 PS: WAVY, WVBT and WNLO-CD are owned by Nexstar, while WTVZ (the one that kind of works) is owned by Sinclair Broadcast Group.
Top

What antenna are you using? Many antennas have poor performance at the bottom of the UHF allocation due to limitations imposed by the design and/or physics. This isn't usually an issue on full-power stations because the lower frequency gives them a stronger signal at the same power level compared to higher-frequency stations, and that mostly makes up the difference, but it is an issue on low-power stations. Generally speaking, bowtie, loop, and log periodic style antennas have a flatter gain curve and are better choices for lower UHF channels than yagi-style antennas, at least until antenna manufacturers get around to designing yagi antennas optimized for the current UHF band.
Top

Only the best... Chinese generic

That was what I was wondering, what's the actual performance on the lower UHF band.

PS: Now this looks like a periodic Yagi, I wonder if it will work better (with an amp of course):
https://www.amazon.com/gp/product/B089G4WRC4/
Top

The second one is indeed a log periodic. The idiot Chinese company screws up the description even worse every time they change the name they're selling as, but in spite of that, it's still probably the best < $25 antenna out there. Amplification is going to depend on how far you are from the broadcast tower, how long the cable run is, and how many ways you're splitting it. You've got about a 20 mile radius that mostly covers Norfolk, Portsmouth, Hampton, Newport News, and Suffolk where an amp probably isn't needed unless you have a really long cable run or a lot of splits. WNLO-CD is on WAVY's tower, which you can see on a map by going to Driver, Suffolk, VA, and looking just to the west for a three-pointed bit of cleared land.
Top

Getting the antenna up higher might help. The combination of low power, the ATSC 3 transmitting antenna being much lower in elevation than your other station (745' vs. 1000-1250'), and the hills in your area make the reception spotty.
Top
Post Reply
14 posts • Page 1 of 1