rpoitras wrote: ↑
Sun Aug 23, 2020 5:56 am
Anyway, this does sound like the same issue and as jasonl has described what PMT means it definitely seems to be the same problem. The Prime menu on both my units say they are Technicolor/Cisco cards but it's wrong as I just checked and it says NDS right on the card. Is NDS required in some areas or can I go and swap them for Cisco cards?

Cisco bought NDS in 2012, so most of the NDS cards out there were actually made under Cisco ownership, but are completely separate products from the SA/Cisco cards. Cisco has since spun off all their cable stuff in two different transactions, first in 2015 to Technicolor then the rest in 2018 to a vulture capital group. Not sure where the NDS cards ended up.
Top

jasonl wrote: ↑
Mon Aug 24, 2020 5:13 pm
Cisco bought NDS in 2012, so most of the NDS cards out there were actually made under Cisco ownership, but are completely separate products from the SA/Cisco cards. Cisco has since spun off all their cable stuff in two different transactions, first in 2015 to Technicolor then the rest in 2018 to a vulture capital group. Not sure where the NDS cards ended up.

Ah, ok, that makes sense now. So the end result is I'm still screwed since my area is not compatible with the "new" Cisco cards so swapping out is not possible.
Top

File the FCC complaint and cross your fingers. It usually does a pretty good job of getting the attention of people, even if it does take a while to work its way through all the channels.
Top

Unfortunately, the response I received from the executive offices after filing the FCC complaint was hostile. In my case, after replacing the CableCard at their direction and the problem remained, I was told that they had done all they were required to do and that the problem must be with my equipment (Tivo), and that I should use one of their boxes to ensure it was supported. Additionally, I was told that if a technician was sent to my home to troubleshoot and found the signal to be acceptable, that I would incur an $80 service visit charge.
Top

Curious to see what kind of mental gymnastics they have to go through to explain how it's still your equipment when two different devices from different manufacturers have the same issue at the same time. When does your PRIME get there?
Top

It’s being delivered tomorrow. I already picked up a CableCard and TA, and the TA is synced up and ready. Getting the CableCard bound may be another adventure.

I did throw a Hail Mary yesterday though and dug through old emails from back in the day when behind the scenes help was readily available when it was Cablevision. I discovered that an engineer that helped me back then is still with the company and is now a senior level executive - so I shot off an email to him with the hope it would get some attention. Haven’t heard back yet though
Top

So, I got my Prime earlier today.. Got firmware updated to 20200521, its connected to the TA, the TA is provisioned properly.. The CableCard is provisioned on my account from when I picked it up, so my unencrypted and encrypted channels that are CCI 0x00 are being received. I did call around 3 hours ago to get the NDS card paired - but of course after being on the phone with them for over an hour, supplying them with the info for the host & card, the guy came back and said that there is a problem with that system and he couldn't get it paired. Said he would call me back later once he gets a status update. I more or less suspected that would happen.

I have already reproduced the glitch issue -- 746 A&E is encrypted, but CCI 0x00 - at least for "The First 48" -- and has been my "go-to" channel for testing this issue on the Tivo.. After 5 mins or so, I get the same audio/visual breakups that the Tivo experiences.

I will say -- at least the Prime doesnt repeatedly scream at you like the Tivo does before the card is validated (it constantly pops up the CableCard "To start service.." message) -- at least you can still use the Prime on 0x00 channels before "CP Auth Received" without annoying popups every 10 seconds. 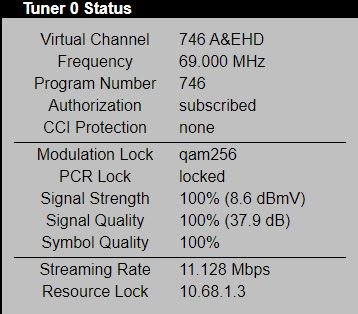 Also, if you want me to enable diagnostics just to confirm that we're both seeing the same issue, I can..
Top

OK.. Watching Tivo on one TV and HD HomeRun on laptop, both tuned to same channel.. Both devices choked at the same point in the programs each time.
Top

More observations... On the Tivo, the majority of these events recover within 10 seconds.. The events that take longer to recover throw a "V58 Channel Not Authorized" error. One thing I just discovered is that on the HDHomerun, these longer events that cause the V58 error to appear on the Tivo -- cause the HDHomerun not to recover at all and to just freeze on the video frame where it occurred and no audio. I have to manually change the channel and then go back to resume watching.

If you can note the times it happens down to the second that would make it easier for them to find in the logs. Just make sure you're getting the time from something that has a properly synced clock (cell phone is easiest).
Top

Thanks. I can definitely do that as you only need to stay on a channel a bit to reproduce. Can you elaborate on how the logging works? If I turn on logging from the web interface of the Prime, does it just stay on and continuously send logs until it’s flipped off?
Top

It stays on for 10 days and then turns back off.
Top

Also noted that after I stopped watching, my local log reported one of these:
20200830-03:50:22 CableCARD: cci authentication error (cchost_copy_protection:1126)
Top
Post Reply
47 posts